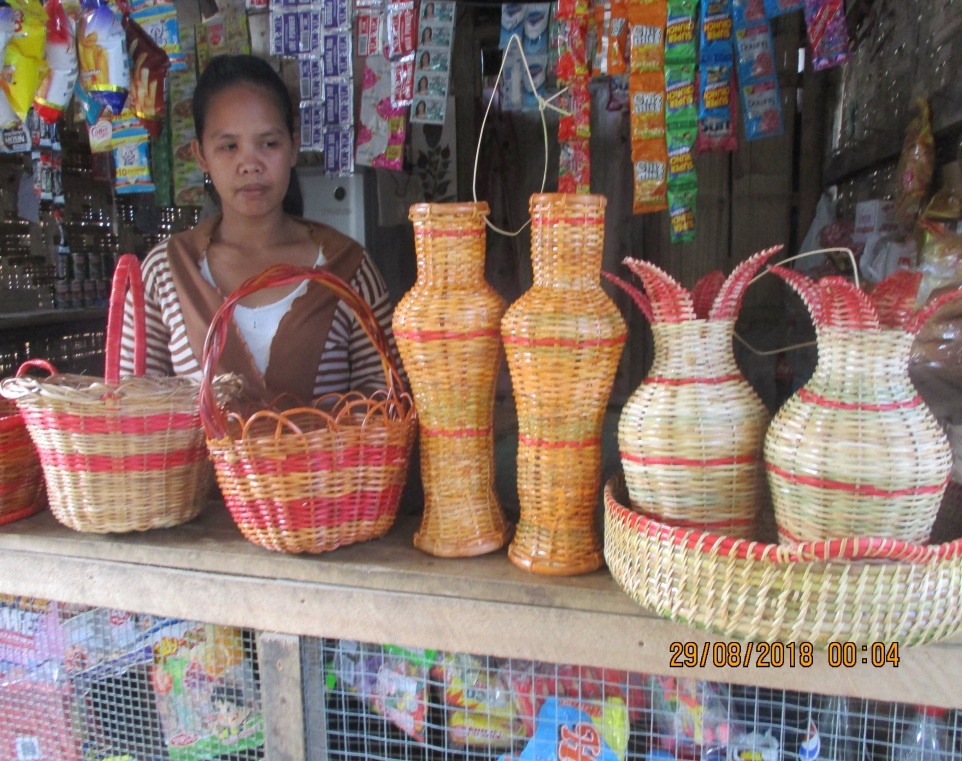 Grace Napawit is a 27-year old resident at Brgy. Tasiman, Lake Sebu, South Cotabato. She is married and has been a member of Monom SHG for 3 years. She and her partner used to live with her partner’s family in a small bamboo house when they were just starting off. Living with them, she observed how they weaved rattan into different handicrafts as this was what they do for a living. At first, Grace struggled but with perseverance she was able to gradually learn the art of rattan-weaving. When their Self-help Group (SHG) was formed, they named it after the Tboli word Monom which means weaving. During their meetings they would bring some rattan to weave while waiting for the other members to arrive, a habit they developed as a group. Becoming a member of Monom SHG gave her a push to strive for a better life. Grace started making her own rattan handicrafts and later improved her skill through a lot of practice. The first handicraft she successfully made was a rattan tray which she was able to sell at Php1,600. Later on, she was able to make more rattan handicrafts to offer to her growing number of customers. Grace was overwhelmed at the sight of the handicrafts she carefully crafted being bought by her customers. This motivated her to build her own house with the income from selling the handicrafts. Upon materializing her house, she continued her rattan handicraft business and later on ventured on a sari-sari store business. She was also able to pay the electricity connection for her house with her earnings. Her recent accomplishment was the long-awaited wedding with her partner. She took a Php5,000 loan from her SHG savings for the additional expenses on her wedding.

Grace is very grateful that she was able to become a member of Monom SHG where she gained the motivation to improve her skill and strive for a better life. Currently, she has 7 designs of flower vases and 4 designs of fruit trays. She is also learning to make other designs to incorporate in her products. Hard work, indeed, is an essential ingredient in bearing fruitful results. A goal will only be a goal unless you are determined to make it happen. Just as Grace had done, she weaved her dream into reality for the betterment of her family’s future.