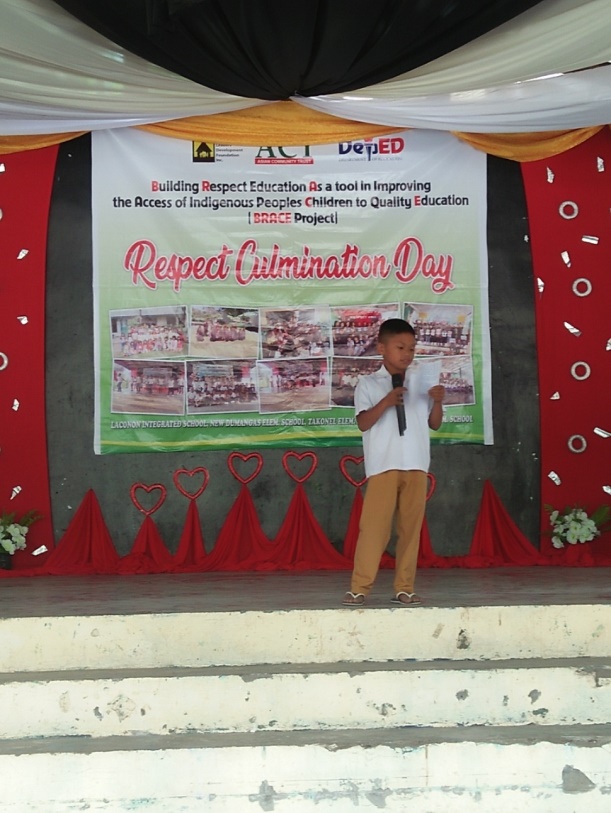 Ryan stands on the stage as he delivered his speech during the celebration of Respect Culmination Day held last February 26, 2019.

“Respect is a seven-letter word which has thousands of meaning.” These were the words of a Grade 6 pupil named Ryan Mark Bangon during the Respect Culmination Day of Laconon Integrated School.  He expressed his gratitude for making their school one of the recipients of the BRACE project. “I am very happy that among the schools in Tboli West District, our school was chosen as one of the recipient schools of the [BRACE] project. In every workshop, we get to learn and enjoy at the same time”, Ryan said. Through the interactive activities that the students enjoy they were able to know their rights, discover their strengths and weaknesses, and learn how to value things. They also learned to accept and respect their own culture and that of the other tribes. “The workshops helped us improve ourselves physically, mentally, spiritually, and socially. We were also able to discover more about ourselves and the talents that we couldn’t showcase before. Through writing stories and poems, we were able to freely express our thoughts and emotions without hesitation or shame” he added. Ryan was just one of the students in their school who had expressed how thankful he is for the things they learned from the workshops. He thanked the BRACE project and TLDFI for providing the opportunity to discover their own potentials and bringing a positive change to themselves. Giving respect and love to each other was the most important thing the students had learned from the workshops. As Ryan had said, “We are all equal and precious in the eyes of God”. Just like Ryan, every child should also be given the opportunity to discover their potential and be confident for who they are.