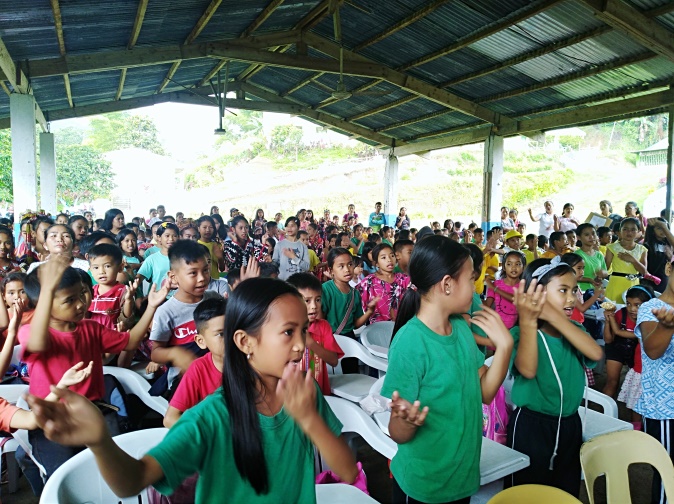 Amidst the downpour of the rain, a heart-warming atmosphere filled the gymnasium as pupils of Bakdulong Elementary School proudly sing with matching hand gestures to their very own Lake Sebu Hymn.

As a partner of TLDFI for the BRACE project, Bakdulong Elementary School has been a recipient of the Respect Education workshops. “Building Respect Education as a Tool in Improving the Access of the Indigenous Peoples Children in Quality Education” or BRACE is a project funded by Asian Community Trust with a long-term goal of improving the quality and relevance of education by creating a learning environment where every child feels safe and accepted to fully develop oneself. Teachers were introduced to different creative teaching strategies and pupils underwent workshops wherein they were given a venue to express themselves and improve their confidence. On the 6th of March 2020, the school celebrated its Respect Day Culmination together with TLDFI wherein pupils from Kindergarten to Grade 6 were given spotlight as they showcased their talents in dancing, recital, and poster and slogan making. Two pupils were also given the opportunity to express their opinions after undergoing the workshops and what they had learned from the activities. Bryan Bandalan Jr., a Grade VI pupil, said that he learned a lot from the workshops especially his right as a child to express his opinions and thoughts which gave him a boost of confidence while Jonalyn Anggay, a Grade V pupil, said that her favourite among the workshops was “Knowing Me, Knowing You” because she and her classmates were able to discover about each other’s personalities, talents, and individuality and learned how to respect one another’s diversities. Pupils from different grade levels were also recognized as Respect Club Officers as they took their oaths in carrying out their responsibilities in promoting the principles of Respect Education. The oath taking was officiated by TLDFI Board of Trustee Member Ms. Mary Grace Guay.